How to pray Taraweeh – Step by Step Guide.

How to pray Taraweeh or offer Taraweeh. Taraweeh is a basic and pious act in Islam, offered by Muslims during the Holy Month of Ramadhan. In this article, you will learn about “How To Pray/ offer Taraweeh”, the Origin of Taraweeh, and what is the meaning of Taraweeh!

So, Taraweeh is an Arabic word that means “to rest and relax”. You can pray Taraweeh in the sets of two-Rakat each like you prays in your daily routine. There are some narrations of the Prophet (S.A.W) that support the opinion that Taraweeh is consists of twenty Rakat, and some narrations support the opinion that you can pray eight Rakats. All four Sunni schools of fiqh as narrate twenty Rakats of Taraweeh.

Anam Faisal is a content writer, who lives in Abbottabad, Pakistan. Anam is devoted to writing new content to promote basic knowledge, learning, and understanding. She enjoys writing articles about food, technology, fashion, and more. She often looks for new methods to enhance the content at StepsHowTo and make it beneficial and comforting for the readers.

When to pray Taraweeh

Muslims line up at night to pray Taraweeh together, right after Isha to observe a number of optional rakats of prayers and listen to and reflect on the recitation of the Quran and take the advantage of this pious meditation.

It is obvious that if Prophet Muhammad (S.A.W) valued Taraweeh's prayers, then the value of Taraweeh in the Quran will be more appraised. Below are some verses of the Quran mentioning the importance of the Taraweeh prayer

In the Quran, Allah Subhaana-Hu-Wa-Ta'aala says

And the servants of the Most Merciful are those who walk upon the earth easily, and when the ignorant address them [harshly], they say [words of] peace. And those who spend [part of] the night to their Lord prostrating and standing [in prayer]. [Quran 25: 63-64]

Normally, it is a bit difficult to stand in prayer at night alone, but it can be easy when done in the congregation (in the form of Taraweeh).

“They arise from [there] beds; they supplicate to their Lord in fear and aspiration, and from what We have provided them, they spend.” [As-Sajdah: 16]

Sunnah is basically the true meaning of living according to Islam, Sunnah showed people how to lead a truthful and glorified life which will be a relief for Muslims in the world and the life hereafter.

"I heard Allah's Apostle saying regarding Ramadan, Whoever prayed at night in it (the month of Ramadan) out of sincere Faith and hoping for a reward from Allah, then all his previous sins will be forgiven."۔ (Narrated Abu-Huraira)

Allah's Apostle said, "Whoever prayed at night the whole month of Ramadan out of sincere Faith and hoping for a reward from Allah, then all his previous sins will be forgiven". Ibn Shihab (a sub-narrator) said," Allah's Apostle died and the people continued observing that (i.e. Nawafil offered individually, not in congregation), and it remained as it was during the Caliphate of Abu Bakr and in the early days of 'Umar's Caliphate." ۔ (Narrated Abu-Huraira)

Step 1 Make the Intention of Taraweeh.

You do not need to pronounce it vocally, but have the intention in your mind that you are praying Taraweeh.

This translates to "Allah is the greatest."

If you have some medical reasons, you are allowed to sit down.

There is an alternative opinion that the hands should be raised to the shoulders. Both ways are valid. Step 3 Place your right hand over your left hand

Place your hands either on your navel, on your chest, or between the two; there's a difference of opinion between Islamic schools of jurisprudence. Again, all opinions are valid.

As you have started the prayer, you must stay focused.

Then fix your eyes on the place of prostration so that you don't look around.

It's greatly discouraging to look up when praying. The Prophet (peace be upon him) said, "People must stop raising their eyes to heaven during prayer, otherwise their sight will be taken away." 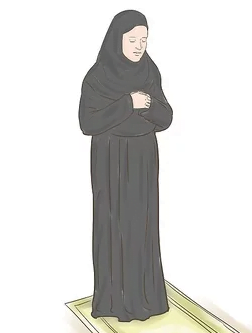 After Du'a Istiftah recite Surah Fateha and Surah Ikhlaas. These are key components of the prayer. You have to recite it in each of the two rak'ahs of Taraweeh.

Step 6Recite any other surah

It is encouraged for someone who has memorized the Qur'an to make each rak'ah lengthy by reciting a long surah. However, if you do not know that many surahs, you can recite the ones that you know, as long as you recite them in the correct order. 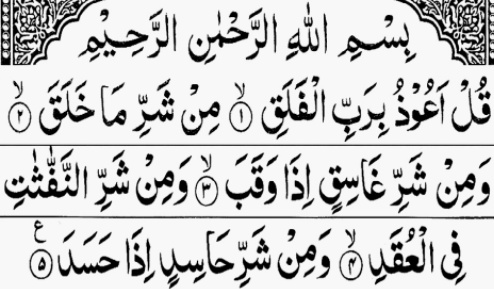 This is the ruku' position. Try to make your back as straight as possible, and keep relax your body. Your body does not need to be at a perfect 90-degree angle.

While bowing, say, Subhanna Rabbiyal Adheem three times. This means "Glorious is my Lord, the greatest."

Some schools of jurisprudence say that you should raise your hands and then go into ruku', while others do not. Both are valid opinions. While rising up, recite Sami-Allah Huliman Hamidah. This means "Allah hears those who praise Him".

While standing up, recite Rabana Walakal Hamd (Our Lord, all praise is for you) once.

Some schools of jurisprudence say that you should raise your hands after you have raised back up, while others do not. Both are valid opinions. This is the sajdah position. Place your head, knees, and hands-on the floor.

Then recite Subhanna Rabbiyal A'laa (Glorious is my Lord, the Highest) three times.

Your forearms should not be on the floor.

Step 10 Rise from sajdah and sit on your knees

Place your left foot from ball to heel on the floor. Your right foot should be toes on the floor only. Place your hands flat on your thigh. 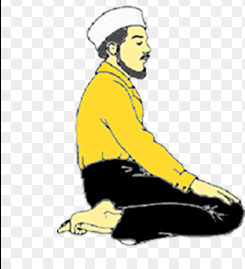 You have completed one rak'ah and you will need to complete another rak'ah.

Repeat all the above-explained steps and complete the second Rakat the same way. Step 13 Finish the prayer with tasleem

Turn your head to the right, and then the life, while saying "'As-salamu Alaykum wa Rahmatullah". Continue praying two-by-two, then end your Taraweeh with dua.

Allah Subhaana-Hu-Wa-Ta'aala created the Making to worship Him. Therefore, he also offered rewards for the people who fear in Him and worship Him truly. Praying itself has the magic to soothe one's soul and mind. Salah for Allah is an obligation for a Muslim. There is no running away from Salah. Salah plays an important role in leading a successful life here and in the peaceful eternal journey ahead. As we earlier mentioned that Hazrat Muhammad (S.A.W) said-

“Whoever establishes prayers during the nights of Ramadan faithfully out of sincere faith and hoping to attain Allah’s rewards (not for showing off), all his past sins will be forgiven.” [Bukhari: 37]

Another Hadith Justifying the benefits of Taraweeh is as below:

How Our Holly Prophet offered Tarawih

Allah Subhaana-Hu-Wa-Ta'aala created mankind to worship Him. The Muslims worship Allah Subhaana-Hu-Wa-Ta'alaa in the form of Salah. Salah is an obligation that can't be ruled out but on the other hand. Sunnah and Nava'fil are not obligatory, but both offerings have multiple benefits. Taraweeh is a soulful act that Muslims perform during the Holy Month Of Ramadhan for the whole month. You can pray Taraweeh alone as well as in the congregation. It is preferred to perform in the form of a group behind one Imam (leader).

Taraweeh is prayed in a Two-Rakat pattern, depending on your strength and focus! Some say there is a 20 Rakat pattern and some say, you can pray in any even number Rakat pattern. The quality of prayer matters more than the quantity. you must be focused on the prayer, in this way if you offer Two-Rakat only wholeheartedly, it would be more than enough.

You can pray Taraweeh in the sets of two, you can choose to pray any even number of Rakat between eight to twenty Rakat for Taraweeh. There is no specific obligation to the recitation of the Quran during Taraweeh, you can recite any part of the Quran. The most important thing is that these prayers should be a means to bring you closer to Allah, so you should try to find out the meaning of what you are reciting in your prayers and make sure that you pray calmly and with full focus.

Quality of your prayer matter more than the quantity of your Salah. So make sure, whatever number of Rakat you pray, focus more on your soul and mind, and keep yourself FOCUSED!! Abdullah ibn Umar narrates that the Prophet ﷺ said “Prayers at night are to be offered two by two (two Rakat at a time). If any of you fears that the time of dawn is approaching, then let him pray one rak’ah as Witr.” Narration by Abdullah ibn Abbas “The Prophet (S.A.W) would pray 20 Rak’at and then within the month of Ramadan.”

Is Taraweeh and Tahajjud the same?

Taraweeh is the Tahajjud that is done in Ramadan in the congregation. Tahajjud is the prayers done at night after the Isha and before the Witr. They have usually prayed alone (except for the Taraweeh), and are divided into groups of two rakah.

Can we pray Taraweeh in 4 Rakat?

Taraweeh prayers are prayed in pairs of two. According to the Hanafi school of Sunni Islam, the standard number of rakats is twenty referring to a narration in Muwatta’ Imam Malik which said that “In the time of Umar, the people used to offer 20 raka’āt”.

How to pray Taraweeh at home?

It is preferred to pray Taraweeh in congregation according to Sunnah. But, if you have any medical conditions or you are in a lockdown area you can pray it at home too. Now the question here is How To Pray Taraweeh At Home? There is no difference in the pattern to perform Taraweeh, either prayed at home or in the mosque, the pattern remains the same.

Can you pray Taraweeh alone?

To offer Taraweeh prayers during Ramadan is a recommended practice of the Prophet (S.A.W) established both by his words and actions which he also urged upon his Companions (R.A). There is no harm in offering Salat Taraweeh alone, but it is better to perform Taraweeh Prayer in the congregation. Prophet Muhammad (S.A.W) used to include His (S.A.W)’s wives, Caliphs, and other people in the congregations (Taraweeh) and prolonged the recitation of the Holy verses of the Quran.